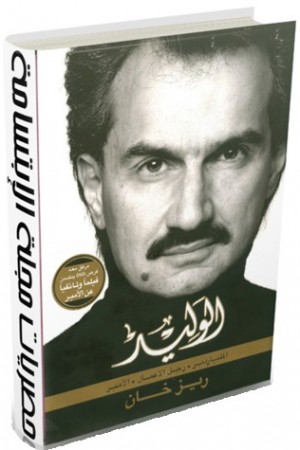 Description:
"There are few individuals as unique, enigmatic, and colorful as Prince Alwaleed Bin Talal Bin Abdulaziz Alsaud." "This biography of the world's fifth-richest man - worth around $24 billion - tells the story of a businessman who started out with a relatively modest bank loan and built an empire that embraces the best-known brands, from Citigroup and Disney to Apple Computers and the Four Seasons Hotels." "Alwaleed, as he's known to most in the Middle East, is the largest single foreign investor in the U.S. economy, with interests in almost everything that touches the American lifestyle. Like investment guru Warren Buffett, Alwaleed became hugely successful through consecutive strategic high-profile investments, earning him the respect of Wall Street." "Beyond the billionaire, jet-set lifestyle. Prince Alwaleed has a close and emotional relationship with the desert and its people. His identity sits on the fence separating the Arab world on one side, with tents, camels, and rifle-toting Bedouins ... and the fast-paced, hungry, pinstripe world of Wall Street, with limousines and designer labels." Brilliant, charming, and extraordinarily hardworking, this billionaire's personal story unfolds in detail, based on in-depth interviews with the Prince's family, entourage, and closest business associates - including top names such as Sandy Weill, Rupert Murdoch, and Jimmy Carter. (less)
Please log in or register to leave a comment .